Book review – Where we Belong by Lynn Austin 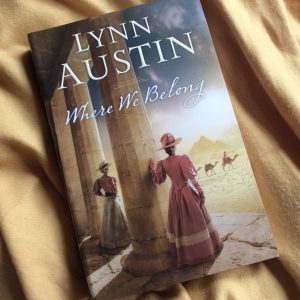 What kind of fiction novel appeals to you? I prefer something a little out of the ordinary, something in an unusual setting, whether in era, culture, country or occupation, than what tends to dominate the bookshop shelves. For this reason, I read romances set in Victorian times pretty sparingly – there’s only so much swooning over tall, dark, handsome gentlemen that I can take! Where We Belong, however, while it is set in Victorian times and contains some romance (although not the main theme of the story by any means), is full of those added elements that make me feel that I’ve not simply been entertained, but actually educated.

Lynn Austin writes about a diverse range of topics, and has a wide breadth of characters and settings. Her books tend to be a little on the longer side, and at 470 pages this one is no different.

Where We Belong is inspired by two real-life sisters who, just like the heroines in the story, discovered a copy of the gospels dating from AD500 at the monastery in Mount Sinai. Travel nowadays to far-off places can seem onerous enough, but imagine having to travel for weeks by boat, train and camel to reach your destination which was really in, as we would say, the back of beyond.

Historical travel is fascinating in and of itself, but the book contains more than that. A few weeks ago I was privileged to view the Codex Sinaiticus in the British Library in London. This fourth century biblical manuscript is mentioned in this book. Other ancient manuscripts play an important part which I found quite fascinating.

Readers of Christian fiction will know how rare it can be to find a book with a good gospel message, but this one presents Christ as the only Saviour and states the need to trust Him. It also contains some apologetics, which interested me as this was one of the themes in my Search for Truth Series. I didn’t analyse these sections too closely, and Lynn Austin doesn’t go into a lot of detail, but it certainly begins to address some of the arguments that atheists use as their reasons for not believing in God.

I really loved the characters of Rebecca and Flora. They are presented flaws and all, and are very atypical for their day with their courage and sense of adventure. Romance is not the main story, and the ending, while happy, is not a chocolate box one. You clearly come away with the sense that life is much more than marrying a handsome husband and having children.

The cover totally captures the flavour of the story – two wealthy Victorian sisters in the Egyptian desert, complete with camels and pyramids. The background of the back cover also alludes to the appearance of ancient manuscripts.

There were a few things about the book that I wasn’t keen on. The story is written in the third person, but from the point of view of four different characters. It also covers a long time span and tends to jump backwards and forwards a little too much for my liking. There is also some repetition as certain scenes are described from a number of different perspectives.

I have to admit I felt a little let down by the ending. I won’t give it away, but I felt that after all the adventure and peril the sisters had faced, it was a bit of an anti-climax, and didn’t portray the sense of danger that I’d expected, especially as the build up to the final scene commenced almost at the beginning of the book. The character of Kate was difficult to like, and I couldn’t work out whether she was meant to be portrayed as a child or an adult – she certainly acted very immaturely at times. I also can’t help but feel that her purpose in the story was only to provide a point of conflict for the ending and, except for that, the book would have managed just fine without her!

Despite the ending, I really did enjoy this book. It was a good, interesting read, and I would recommend it. You’ll probably learn at least something you didn’t know before, and the quote, borrowed from the real-life sisters who provided the inspiration for the story, and repeated many times throughout the book, is a good reminder of God’s faithfulness and care. ‘God knows when the end of our days will be. We have nothing to fear.’

Where We Belong by Lynn Austin was published by Bethany House in 2017. It is available from good Christian bookstores. Click here to purchase from Ritchie Christian Media.