Princess Precious and the Great King of Everything, by E M Wilkie 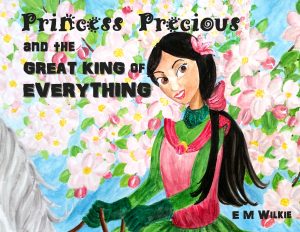 In this post, I chat to fellow children’s author, Eunice Wilkie, about her new release, Princess Precious and the Great King of Everything. This is a beautiful book with great biblical lessons. Little ‘princesses’ are going to love it!

Princess Precious serves the Great King of Everything who lives in Forever Castle, high in the sky. But sadly, not many of the people around her believe in him; they don’t seem to see all the good things the Great King has given her and how splendid he has made her. Unless the people trust in the King, they won’t receive the riches he has for them. The Princess must tell them about him. How can she help them to find him?

Where did you get your inspiration for this story and was there anything in particular which prompted you to write it?

In September 2015 I spent time with my nieces in the USA – three little girls aged 4-6. I saw firsthand how much they loved all the clothes and accessories and books which made them feel like a princess. I had a vague idea it would be good to write a princess story for them – one which wasn’t just another ‘happily-ever-after’ adventure, but also taught something about the message of the Bible. So, while the girls played, I began to scribble ideas – not knowing whether it would amount to much. But stories take on a life of their own – and, a bit further down the road, the book is completed at last.

Would you describe this book as an allegory?

Yes, the book is intended to be an allegory. You could read it as a ‘princess story’ without understanding the hidden message, but I’ve also included an explanation at the back of the book to show how I hope it simply demonstrates the message of the Bible. Of course, no allegory is perfect, but I hope readers will see what the story is intended to portray. 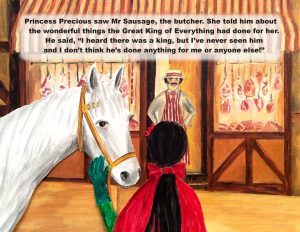 Is there any significance to the various people and places mentioned?

I love making up the names of imaginary places and people! The places and characters in this book are generally named to show what they are, or what they do. For example, the town of Earthworm is where people don’t believe in the Great King because they can’t see him; they’re taken up with the things that they can see around them – they are very earthbound. Town characters are named to show what they do, like, Mr Sausage, the butcher, and Mr Crust, the baker. I must admit I added in a slightly more personal touch to the Kingdom of Farr – it is meant to be a faraway place, but I couldn’t resist using the spelling ‘Farr’, which is the name of the place where we live! 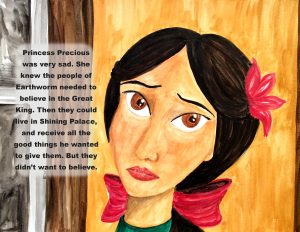 You also illustrate your own books! How did you produce the beautiful artwork in ‘Princess Precious and the Great King of Everything’?

I love illustrating – but I must admit the illustrations for this book were frustrating at times! I decided to use two contrasting methods of illustrating. There is a theme in the book that things look different depending on what you believe. So, dull/neutral tones of oil paint were used for everything relating to the townspeople who don’t believe in the King, and bright watercolours were used for everything relating to the princess who does believe in the King. Some illustrations include both – which was a first for me! 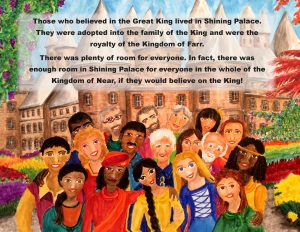 A wonderful feature of this book is the representation of different nationalities and races. Can you tell us a little more about this?

Olivia, one of my nieces, is adopted from China. This got me thinking about how to represent all types of people in the book (I really think of Princess Precious as Chinese which is intended for Olivia). We know that skin colour or race is irrelevant when it comes to the message of the Bible – it’s applicable to all equally, no matter what ‘religious tradition’ a country or race might hold. So I wanted to represent all nations of people throughout the book.

What is your aim and prayer for this book?

Simply to promote and explain the message of the Bible – God’s way of salvation – to children and any other readers.

Finally, are we going to see more of Princess Precious, or is this a standalone book?

I’m not sure. It can certainly be read as a standalone book, and when I finished the last illustration I didn’t want to think about another book! But there are plenty of ideas that could be explored, plenty more that Princess Precious could learn and do. I think I’ll take advice from my nieces…and maybe when the dust has settled a bit from this one…we’ll see! 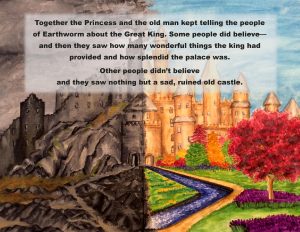 Princess Precious and the Great King of Everything is suitable for ages 4-7 and is published by John Ritchie Ltd, ISBN 978 1 910513 71 2 . To find out more information about this book, click here, and to purchase from the publisher, click here. Eunice has also written the Aletheia Adventure Series, Bible Story Adventures and Weenies of the Wood stories. Her Facebook page is Aletheia Books by E M Wilkie.