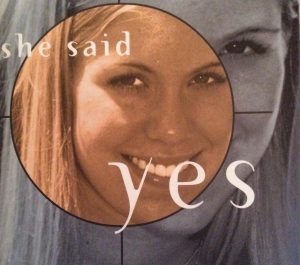 Heading the list, and the most obvious choice, is the Bible. I don’t believe that, for a believer in the Lord Jesus, any book will ever impact our lives like the Bible, because it is through His word that God speaks to us. Apart from the Bible, though, there are a number of books I’ve read at different stages of my life which have deeply affected me. As I think back to my teenage years, one book stands out.

In the proliferation of school shootings over the past number of years, the memory of the tragedy at Columbine High School on 20th April 1999 may have lost its impact. Or if you are one of the younger generation, maybe you weren’t even born.

‘She Said Yes’ is a book about one of the victims, Cassie Bernall, who was 17 years old. Her story, written by her mother, is gripping. A few years before the tragedy, the Bernalls were horrified to learn that their pretty, blonde-haired daughter was involved in the occult, fascinated with self-mutilation and witchcraft. They discovered that she was exchanging gruesome letters with a friend in which they discussed plans to kill their teacher and Cassie’s parents.

In the spring of 1997, Cassie’s life dramatically changed when she was born again. The book details some of these changes. The truth of the words ‘if anyone is in Christ, he (or she) is a new creation’ (2 Corinthians 5:17), was evidenced in her life.

A week before Cassie died, she told her mother that she wasn’t afraid to die, because she would be in heaven. In 1998, she wrote on a scrap of paper, ‘I will die for my God. I will die for my faith. It’s the least I can do for Christ dying for me.’

On 20th April 1999, two students, armed with guns, entered the library of Columbine High School. One of them asked Cassie if she believed in God. She said, “Yes.” In an instant, she was in heaven.

Who could fail to be touched by the story? For me, as a teenager at school, however, this book had a profound impact. Would I have had the courage to do what Cassie did? Was I living for Christ? And was I willing to die for Him?

Yesterday, as I re-read the book to refresh my memory, the same questions rose up in my heart. Years have passed, things have changed, but the impact is still the same. What if this is our last day on earth? Are we ready to go? Are we saved? And if so, are we living for the Lord Jesus Christ, who died for us?

For, as the sentence Cassie underlined in one of her favourite books says – ‘All of us should live life so as to be able to face eternity at any time.’

‘She Said Yes – the unlikely martyrdom of Cassie Bernall’ by Misty Bernall, is published by Plough Publishing House. Please note – to emphasise the darkness of Cassie’s life before trusting Christ, Misty quotes a selection of Cassie’s writings. Be aware that a few of these writings contain a small number of words that you may not wish to be exposed to.