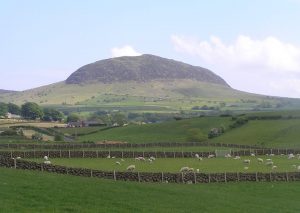 It wasn’t only local people who visited the mountain, however. Each 17th March, Saint Patrick’s Day, hordes of people descended on our area in cars, buses, and even walking the ten or so miles from the nearest town. From our garden, we were able to see the climbers as small specks silhouetted against the spring sky.

Saint Patrick’s Day celebrations vary widely throughout the world. In Chicago, a city where many residents claim Irish ancestry, the Chicago River is turned green. Saint Patrick’s Day parades are held in obvious places such as Dublin and Belfast, and as far away as Auckland in New Zealand. There’s even one in Hong Kong! Then there are many people who visit sites, including Slemish, which are associated with the man who is credited with bringing Christianity to Ireland.

I often wonder what Patrick would think if he were here today. What would he make of the explosion of green, the leprechauns, the shamrock, not to mention the pints and pints of Guinness consumed on this day?

Sometimes the lines blur between what is fact and what is legend, but we can actually read Patrick’s own words, preserved for us in The Confession of Saint Patrick.

Wait – a sinner? But isn’t he called Saint Patrick?

One of the misconceptions today is that saints are only those people, already dead, whom a body of men decree to be saints after a lengthy process. Another is that ‘saint’ and ‘sinner’ are terms which are polar opposites, and mutually exclusive.

But Patrick had it right. In Romans 3:23 the Bible says that ‘all have sinned and fall short of the glory of God.’ Patrick knew and accepted this. Everyone who was ever born into this world (with the exception of the Lord Jesus Christ) is a sinner. Not one of us, including Saint Patrick, is good enough to go heaven on our own merit.

We need salvation. Someone to save us from our sins and make us fit for God’s presence. This was why the Lord Jesus Christ came into the world and died. On that cross, He was bearing the punishment that our sins demanded.

In his confession, Patrick tells us that he turned with all his heart to the Lord his God, and, further on, stated that ‘Jesus Christ is Lord and God, in whom we believe’. When the Bible speaks of saints, it is always speaking of those who are Christians, those who are depending only on Christ’s work on the cross to take them to heaven.

Therefore, despite being a sinner, Patrick was also a saint – one who has trusted Christ for salvation. And the great news is that this can be true for everyone.

‘For God so loved the world that He gave His only begotten Son, that whoever believes in Him should not perish but have everlasting life.’ – John 3:16