Harry and the Lost Sheep – hardback release, behind-the-scenes and a giveaway! 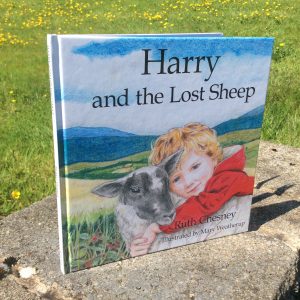 Harry and the Lost Sheep was published in 2016 and was the first of the Harry books to be released. Quite a few parents have told me that their little ones love it, so I’m very excited that it has just been re-released in a hardback format, and I thought I’d give you a little look behind the scenes. I’m holding a giveaway as well, so read to the end to learn how you can enter.

How did Harry and the Lost Sheep come about?

In 2014, I heard via another author that John Ritchie Ltd were looking for suitable stories for small children. I’d already begun to write Evidence, the first book in the Search for Truth Series for teenagers, but decided to scribble a few ideas down for a story for little ones. That story was amended and redrafted a number of times but finally ended up as Harry and the Lost Sheep.

How did you find an illustrator?

Ritchies had an illustrator in mind who began to work on the illustrations, but due to circumstances outside of anyone’s control, this didn’t work out. Meanwhile, I heard that Mary Weatherup was keen to illustrate children’s books. I’d known Mary for years, and knew that she is a very talented artist. We met up and discussed the illustrations, and when she sent me the first illustration I was delighted – it was exactly as I had envisaged the artwork to look.

Is Harry based on someone you know?

When I wrote the story, I imagined a typical little boy living on a farm, so Harry isn’t based on anyone specifically. He is called after my cousin’s little boy, who was born very prematurely around the time I was writing the story. That little Harry is now three and is a very active, healthy boy. For her illustrations, Mary used a real life model for Harry – a boy called Finlay who lives in the countryside near Slemish mountain (which is on the back cover).

What are the challenges of writing for this age group?

The main challenge is that the story, and especially the gospel message, has to be simple. I would write a draft, thinking it was as simple as was possible to make it, then send it to others for review, who sent it back asking if I could simplify it further! Another challenge is to keep the wording on each page short and yet suitable for detailed illustrations to hold the interest of the children – always a little more difficult with those pages containing the gospel application, but so very necessary.

Are there plans for any more Harry books?

Harry and the Muddy Pig was released in 2017 and we have plans for another two stories. Illustrating such beautiful pictures takes time, though, so they won’t be available for a little while yet!

To celebrate the release of the new hardback format of Harry and the Lost Sheep, I’d like to give away a copy. To enter, please leave a comment on this blog post (anything at all – even a smiley face will be enough if you can’t think what to say!). I’ll pick a winner at random on 1st June.

Please note – my website is set up in such a way that comments are only visible after I have approved them, so don’t worry if your comment doesn’t immediately appear. Also, apologies to my international readers, but this giveaway is only open to those who have a UK mailing address, due to postage costs.