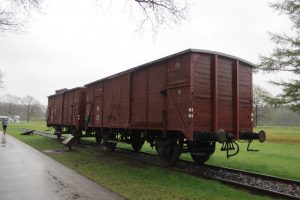 This is the second of a three-part series about the places Anne Frank stayed from when they went into hiding in 1942 until her death in the concentration camp at Bergen-Belsen in 1945. Camp Westerbork, a former transit camp, is located in the north-east of Holland, near the village of Hooghalen.

The rain falls in sheets, dripping off the tall trees and turning the path into a dirty track. I huddle under an umbrella and wrap my flimsy raincoat tighter around me. My feet are wet and dirty in my peep-toe pumps. I’m certainly not dressed for the conditions.

It feels appropriate, somehow, both the dreary day and my discomfort. I’m walking along a path through what had been a busy, bustling camp during the second world war. Camp Westerbork – a transit camp for prisoners on their way from Dutch towns and villages to the concentration and death camps in the east, people who had been searched out and rounded up by the Nazis. They had left their homes and many of their possessions. People like Anne Frank and her family, who had initially fled Germany for Amsterdam and finally went into hiding when Holland fell under German control. They’d been caught, held in the House of Detention in Amsterdam, arriving in Westerbork on 8th August 1944.

There isn’t much of the original camp left – the camp commandant’s house, part of one of the barracks and the lookout tower. But there is enough. Enough to gain an appreciation of the magnitude of sadness. Most of those travelling onwards from this camp would never return. 102,000 from Holland, not only Jews, but resistance workers and Sinti and Roma as well, lost their lives at the hands of the Nazi regime.

At the site where roll call took place, thousands of little red stones are laid out in rows. 102,000 stones to be precise – one for every person who passed through Westerbork and didn’t come home. With varying heights to represent the ages of the victims, the rows of stones are arranged in the shape of the Netherlands and cover a large area. The magnitude of the tragedy we now know as the Holocaust is driven home with overwhelming force. Yet these represent only a fraction of those killed.

Further down the path, I pass a railway boxcar – something you expect would transport freight or animals, not crammed full of living, breathing human beings. The base and wheels are original, but the wooden frame has been replaced. As I stand, I can hear names being read out in a sombre monotone. All day, every day, the names of those who lost their lives are read out.

At the end of the path, outside the camp boundary, a section of railway track, now a monument, ends against a low stone wall. But it’s the side pointing towards the camp that catches my eye. The metal ends of the track are bent upwards in an arc, pointing towards the sky. A symbol, I’m told, of the dismay and bewilderment that results from realising what happened to the Jewish people.

As I leave the damp and dull remains of Camp Westerbork, I pass the boxcar, the names still being read out one at a time. The German occupation, and the Holocaust in particular, was a very dark chapter in the history of the Netherlands. And those who run Camp Westerbork as a tourist attraction are determined that those who never came back will not be forgotten.