22453
post-template-default,single,single-post,postid-22453,single-format-standard,stockholm-core-1.2.1,select-theme-ver-6.3,ajax_updown_fade,page_not_loaded,side_area_uncovered,,qode_menu_,wpb-js-composer js-comp-ver-6.1,vc_responsive
22/06/2018 In Parents, Search for Truth By Ruth Chesney

What Age is the Search for Truth Series suitable for? 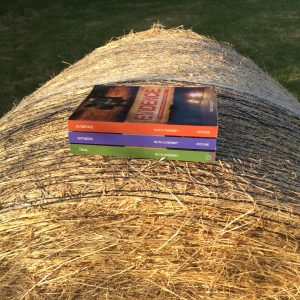 I’m told it’s a challenge finding appropriate books for children and young people and I often get asked what age the Search for Truth Series is suitable for. When the idea of writing a fiction novel first began to drift into my thoughts, the age group was one of the first things that I considered. As a child, I had a variety of good, wholesome books to read, and when I got older I was introduced to adult Christian fiction written by authors such as Janette Oke and Lori Wick. My younger brothers, however, had very few options. As teenagers, their Sunday school prizes were generally biographies of great preachers – worthwhile, but not light reading, in many cases. And apparently things haven’t changed very much since then. So, with that in mind, I decided to write for teens, making sure that it was something boys would want to read, though not excluding girls.

Printed on the back of the books is the recommended age group which is 13+. I fully recognise that a number of children may be ready for this series long before that. However, as with any book, I strongly recommend that if you’re giving these books to a younger child (especially of primary school age) that you read them through first, or at least read samples of a number of chapters throughout.

To help widen vocabulary, I have included a sprinkling of advanced words which a young person may not be familiar with, but these aren’t numerous, and can usually be figured out from the context. I’ve tried to make the books easy to read, with fairly short sentences and no lengthy descriptions. The publishers have also chosen a fairly large print, which makes for a more comfortable read. So, in this respect, a younger child who is a good reader will have no trouble being able to read and understand these books.

The recommended age, however, is to do with content. I realise that upbringing and background will differ immensely from child to child, but these books deal with some difficult issues. For that reason, I personally feel that not every pre-teen or primary school pupil is ready to read about some of these things, especially if they have been sheltered at home.

The series begins with a less-than-happy home environment, with Seb, the main character, trying out smoking for the first time. While not a main feature, all of the books do contain peril and violence at some point, including one incident of the aftermath of severe domestic violence in Witness. Guns also feature in Evidence, and drug trafficking is a major theme in Witness. The purpose in incorporating these topics, all of which would be generally known about by teenagers, isn’t to glorify sin, but to show the damage that is caused. The books also hint at some boy-girl attraction and romance, especially in Trial. Finally, some have told me that they would be happy to give the books to their child to read, except that the child still believes in Santa Claus. If you’re curious as to what this has to do with a book about a teenager moving to the country, let me quote from Chapter Two of Evidence – ‘He’d always wondered if there really had been such a person as Christ Jesus, and if He really came into the world, or if He was someone just like Santa Claus, someone who the adults always pretended was real, but was totally made up.’ As I had teens in mind when I was writing, this wasn’t something that I foresaw being a problem, but I feel I need to point this out.

So should you let your 8-,9-, or 10-year-old read The Search for Truth Series? As a parent, that’s your decision. I know it’s not possible to censor everything your child is going to read, but I believe that it’s important not to presume that a book written with older children in mind is suitable for younger ones, simply because it is written by a Christian author, published by a Christian publisher, and sold in a Christian bookshop.

If you have any further questions regarding content and suitability, please feel free to get in touch with me here.

And, finally, as to the upper age limit… well, from what I’ve been told, there simply isn’t one! 🙂