Post for teens – Sharing secrets: when people let you down 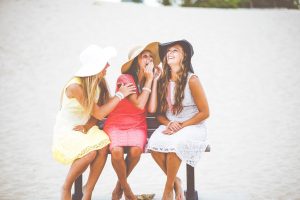 It was so exciting! Kelsey was just bursting to tell someone – she couldn’t keep it to herself any longer. She turned to her best friend and enthusiastically whispered the secret. At lunch, a girl Kelsey hardly knew walked up to her, a smug smile on her face. “So what’s this interesting news I hear?!” Kelsey’s mouth fell open. There was only one way the girl could have known. Her best friend had actually betrayed her!

Hands up if something like this has ever happened to you. Yes, I thought so! Me too! Maybe you’d found out something and you were dying to share it – some interesting piece of information. Perhaps you were feeling sad or confused and wanted to talk about your problems. Or maybe you just really liked someone and wanted to gush about them. But then you picked the wrong person to confide in.

Our secrets don’t always stay secret, as Kelsey discovered. Some people aren’t very trustworthy, and sadly it’s often hard to know who those people are until they’ve let us down. It’s a crushing feeling, having someone you don’t know very well come up to you and ask you about something you only ever told one person in confidence. You suddenly feel betrayed.

Did you know that the Lord Jesus Christ had problems with people who spread around what He had told them not to talk about? In Mark chapter one, a leper came to the Lord Jesus Christ, and asked to be healed. Verse 41 says that He was moved with compassion, and He healed the man. Afterwards He had very straight instructions for the healed leper – he was to say nothing to any man. But what did the man do? ‘He went out, and began to publish it much, and to blaze abroad the matter!’ What? Didn’t he hear what the Lord Jesus told him? Of course he did! Imagine, after the Lord Jesus having compassion on him and healing him, that he went around telling everyone what the Lord had told him not to. The healed leper might have tried to justify his actions by saying, ‘I want to tell others how great Jesus is!’ But his actions had consequences. The Lord Jesus was no longer able to go openly into the cities, and instead was in the desert. It looks like the man’s words actually hindered the Lord’s ministry.

Of course, the Lord Jesus knew beforehand that the man would do this, yet, in His marvellous kindness, He healed him anyway. However, we don’t have the ability to see into the future. How are we to know who we can speak with?

Firstly, some things shouldn’t be spoken about. We need to be really careful that we don’t fall into the trap of gossip. When I was a teenager, my aunt often advised me to put everything I said through three sieves – Is it true? Is it needful? Is it kind? Wise advice, and I wish I’d done it more often than I have done. The Bible has a lot to say about talebearers and gossip… and none of it is good!

So, you’re satisfied that what you will be saying isn’t gossip. Maybe you want to talk through a problem, share something that’s bothering you. That’s totally normal. Who do you choose to share with? Look for wise friends. People who gossip and spread others’ secrets are probably going to do the same with yours! And don’t forget that some of the best listeners might be closer to you than you realise – maybe in your own home or extended family, or your church. They might not even be your age at all! When it comes to true friends, age doesn’t matter.

And what if someone has let you down, spread your secret? It’s hurtful, but we should forgive that person. We may have even done the same thing ourselves! We can learn from the experience – how to guard our words, and our hearts; how to choose a good friend, and how to be a faithful friend ourselves.