The dog who rides a motorbike, and other scenes from a Mexican road trip 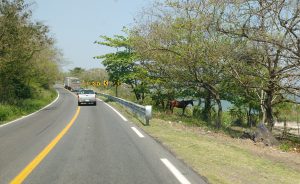 The little dog, resplendent in red cape, goggles and tiny hat, sat calmly on the seat in front of the motorbike rider. His little ears flapped in the breeze as they zoomed past the ridiculously long line at the toll booth. I blinked. Had we been waiting so long that my boredom-addled brain was beginning to envisage scenes out of a children’s illustrated story book?

But no. This was Mexico. The land where motorbike-riding dogs happily share the unpredictable roads with green and white Nissan Tsuru taxis (an ancient design of car preferred by the Mexican taxi industry) and enormous road-hogging double-trailered trucks.

Travelling by road throughout any country gives a flavour of real life, more than hopping tourist-like from city to city by plane, and even more so when the two-lane highways give way to rough and winding single lane roads. Along the coast, beside mountains, through arable areas where orange groves and corn are planted on numerous impossibly steep little hills. Through towns, where brightly-painted restaurants and questionable hotels jostle with small stands selling homemade juice or hats, and crude, jarring speed bumps, known as topes, slow the journey to a crawl. Unless you manage to overtake one of those semi trucks on the tope, that is. If you do, though, watch out for the Policia Estatal. According to one policeman who decided to pull the gringos over, it’s okay to pass here, but not if the police are around. Rules are flexible and selective in Mexico, and videoing the exchange can guard against enforced bribes.

This is the land where people pass on blind hills, where hazard warning lights are used with wild abandon and the intention is anyone’s guess. Where the authorities decide to shut one lane for no apparent reason, causing both north and south bound traffic to queue forty minutes to use one solitary toll booth. Where the trucks drive for much longer than would be legal in the U.K., and where, when they do pull in at the edge of the road, you might see the driver string a hammock under the trailer and relax with a bag of oranges.

Travelling in Mexico can be many things – frustrating, exhausting, maybe a tad nerve-wrecking. But, as we’ve always discovered, there’s one thing it’s not. And that’s boring.

I’m pretty certain that the little motorbike dog would agree.