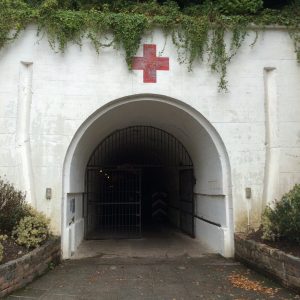 Dotted over the island are certain buildings which mar the beauty, stark reminders of a time when Jersey wasn’t a peaceful place, instead shut to visitors and a virtual prison for the Jersey people. I guess I had always known that the island had been occupied by the Germans for five years during World War Two, but it wasn’t something that I’d thought much about as a child. This time, I noticed the bunkers and the lookout towers, placed in idyllic surroundings like La Corbière, where the Victorian lighthouse stands, a warning beacon to ships of the dangers of the wild and rocky shores.

The Jersey War Tunnels, excavated in terrible conditions by prisoners of war from places such as Russia, Ukraine and French North Africa, are now a popular tourist attraction. The stories recounted throughout the exhibition bring to life the deprivation, the difficulty and the deception experienced in the occupation years. Those islanders who betrayed their neighbours to the Gestapo, those who were much too friendly with the enemy…and those who risked their very lives to help others.

One such story is that of Dorothea Weber, who, at great personal risk, succeeded in sheltering a Romanian Jewess, Hedwig Bercu, who was wanted by the German authorities and would probably have ended up in a concentration camp. Dorothea’s husband, an Austrian baker, had been forcibly drafted into Hitler’s army, most likely causing Dorothea to become an outcast amongst her family and neighbours. This kind and noble lady shared her rations with Hedwig and supplemented their meagre fare by fishing at night. While there is much more to this truly fascinating story, for Hedwig at least the story had a happy ending – she survived to the end of the war and eventually married a sympathetic German soldier she’d known in Jersey.

War is a time when man’s utter depravity and evil is evident and visible, an ugly and horrific scene, yet such a dark backdrop only makes the brightness of sacrifice glow more beautifully.

I’m reminded of another sacrifice. God’s Son, the Lord Jesus Christ, willingly came to this ugly scene. He sacrificed Himself for His enemies, not just for a few people, or even a nation, but for the whole world. Against the background of all of the worst kinds of evils, the sacrifice and death of the Lord Jesus Christ shines forth in all its glory and splendour.

It will forever be remembered as the greatest sacrifice of all time.

‘Greater love has no one than this, than to lay down one’s life for his friends.’ John 15:13